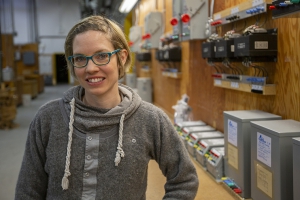 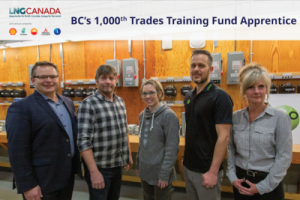 February 6, 2019 – Vancouver, BC– LNG Canada and the BC Construction Association (BCCA) today announced that Marissa McTavish, an electrical apprentice from Prince George, has become the 1,000th participant in LNG Canada’s Trades Training Fund (TTF) and her employer, Primus Electric, the 500th employer to sponsor an employee with the Fund.

Launched in the fall of 2015, the LNG Canada TTF is administered through the BCCA to support industry and apprenticeship training in the construction sector across BC. To date, $1.5 million in TTF funding has helped cover the costs of training for apprentices developing their skills in high-demand trades.

When Ms. McTavish begins her Level 3 training at the College of New Caledonia (CNC) this month, she will become the 150th LNG Canada TTF placement there. McTavish recently celebrated the triple-milestone in Prince George with Tracey MacKinnon, Workforce Development Manager at LNG Canada, Chris Atchison, President of BCCA, Ray Dussault, electrical trades instructor at CNC, and Ben Primus, Marissa’s employer and the owner of Primus Electric.

“LNG Canada’s support makes a big difference to our small electrical company and to Marissa, who is a great example of a hard-working British Columbian looking for an opportunity to support her family with a rewarding career in the construction trades,” said Primus.

“As a single mom, this opportunity to develop my skills in the electrical trade means steady employment, good wages, and self-respect,” added Ms. McTavish. “I want to thank Ben at Primus Electric and LNG Canada for this support in completing my apprenticeship and launching my career.”

For LNG Canada, which today announced that funding for the TTF will continue, the program is playing a valuable role in increasing the number of skilled tradespeople across the province.

“At LNG Canada we recognize the valuable role all British Columbians play in maintaining a vibrant skilled workforce, not only for the emerging LNG industry, but for the prosperity of industries across B.C. We’re proud that our program is connecting people to successful employment in their local regions and acknowledge the leadership of the employers who are sponsoring apprentices” said MacKinnon

The Trades Training Fund is one of several initiatives LNG Canada is spearheading to 2 address the skilled worker shortage in BC, where multiple multibillion-dollar construction projects are expected to require thousands of skilled labourers and tradespeople over the next few years.

“In our 2018 industry survey, 68 per cent of employers said finding skilled workers is their biggest challenge. LNG Canada is helping to address that gap and opening up rewarding career opportunities for British Columbians across the province,” said Atchison.

“When I started as an electrical apprentice three years ago, I didn’t know how to use any tools. I was embarrassed that I had to ask my journeyman (mentor) Eli Bailie how to change a drill bit in my drill,” laughs Marissa McTavish, electrical apprentice at Primus Electric based in Prince George, BC.

“It’s something so basic. We can joke around about it now. But at the time, Eli was so kind and patient and didn’t make fun of me at all,” she adds.

Marissa admits it’s been a bit of a journey to get to where she is today. Originally, Marissa attended university to study English Literature, but having her second child interrupted her post-secondary studies. She decided to focus on her family and her two young children.

But once her children were older, she returned to the workforce, working in retail at two hardware and building supply chains.

While enjoyable enough, Marissa wanted something else. “I was always searching for something more. I was really determined to support my family, have a good income and a steady job.”

The skilled trades caught her attention, and after talking to some contacts about opportunities in the trades, she decided to pursue a career as an electrician. “A big reason I chose electrical is because I was told it takes more brains than brawn,” she chuckles. “Since I’m so petite and only about 105 pounds, I thought it might be a good fit.”

Marissa, now 36 years old and a single mother of four, needed to upgrade her education before applying for the electrical foundations program. The course provides basic knowledge and skills needed for entry into the trade and is a requirement before becoming an apprentice.

Once she completed the electrical foundations program, family-owned and operated Primus Electric hired Marissa as an apprentice, and to say she was thrilled would be an understatement.

Marissa joined as the only female apprentice. “It was a bit daunting to be entering a field that is heavily male-dominated,” she says. “I was scared but I knew I could figure out how 3 to do it. The owners, Ben Primus and Chris Wiebe, and journeyman Eli Bailie, have been so supportive and patient. I’ve learned so much over the years.”

According to The Construction Sector Council, only four percent of women are employed in construction trades in Canada. Marissa says a lot of women are really surprised to learn that she’s apprenticing to be an electrician. “I really hope other women are inspired to explore careers in the trades. If I can do it, so can they,” she adds.

Marissa is in her final year of her apprenticeship and appreciates that her employer applied to the LNG Canada Trades Training Fund on her behalf.

“We believe that classroom training is a crucial part of the apprenticeship program. Any form of financial support that our apprentices can receive while they’re in school helps them tremendously,” says Ben Primus. “We chose to help Marissa with the application for the LNG Canada Trades Training Fund because we knew the impact it would have on her while she’s in school, and we’ll continue to encourage our apprentices to apply for this fund.”

Launched in the fall of 2015, the BC Construction Association administers the LNG Canada Trades Training Fund, which supports industry and apprenticeship training in the construction sector across BC. To date, LNG Canada’s contribution of $1.5 million into the Fund has helped cover the costs of training for apprentices developing their skills in high-demand trades.

Marissa is the 1,000th participant in LNG Canada’s Trade Training Fund and Primus Electric is the 500th employer to sponsor an employee with the Fund.

“I’m so grateful for the support from LNG Canada and Primus Electric,” says Marissa. “It means that I don’t have to finance my schooling on my credit cards. It’s a huge relief to be able to attend school without the stress of wondering how I will pay for it. I can just focus on doing really well.”

For women exploring a different career path, Marissa says, “I see so many people in jobs they’re not happy in. They feel they can’t do anything worthwhile unless they have a university education. But they’re wrong. There are so many opportunities in the trades. They must be willing to give it a shot and work hard to be in a better financial position in the future. You’ll learn new skills and have fun doing it. I’m doing it and it’s working out pretty well for me.”

For more information about the program, visit the BCCA Trades Training Fund page.