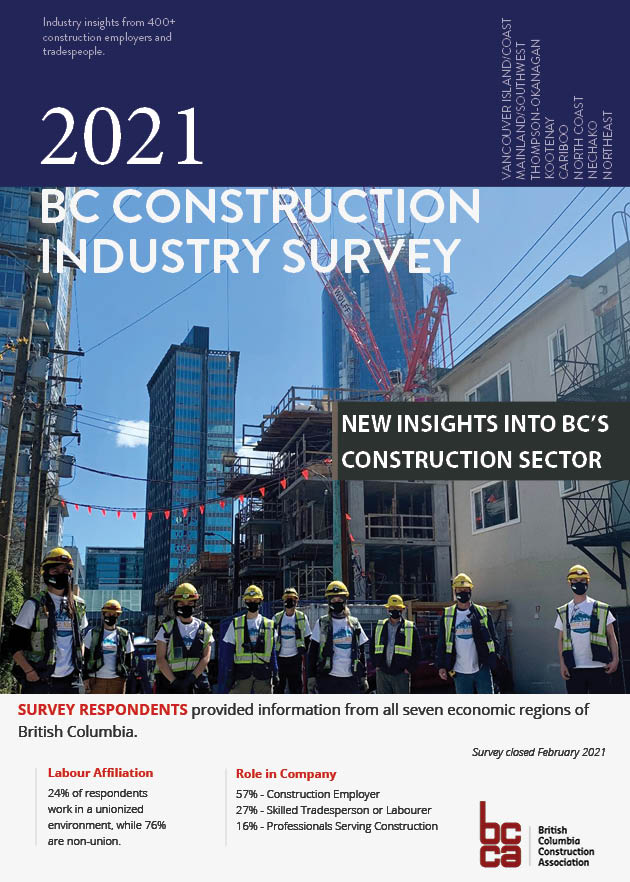 Victoria, B.C. (April 22, 2021) –The findings of a new industry-wide survey released by the BC Construction Association (BCCA) for Construction Month 2021 reveal the career opportunity in a sector officially designated as essential to the provincial economy during pandemic.

B.C.’s construction industry continued to operate safely despite COVID-19, which had the dual effect of increasing the financial stability, job satisfaction, and diversity of the workforce while putting new strains on employers who sought to balance safety protocols, late payments, rising costs and materials shortages with their responsibility to keep working when others could not.

B.C.’s construction industry continues to be the number one employer in B.C.’s goods sector, with more than 219,500 people relying directly on construction for a paycheque: that’s down three percent since 2017, but at eight percent of the total workforce is more than any other goods-producing sector.

Over the course of this pandemic year the top issues of concern to construction contractors shifted somewhat, although availability of skilled workforce remains the number one challenge regardless of labour affiliation. The chronic lack of prompt payment jumped from third to second place and worries about safety took the number three spot this year despite not being in the top five in past years. COVID-19 bumped out small business taxes from the number four spot, and public sector procurement practises remained at number five in the list of top concerns.

The BCCA survey results show an increasingly diverse workforce, where workers’ overall satisfaction as measured by their likelihood to recommend construction careers to friends and family rose 118 per cent from the prior year. Part of that increase can be attributed to financial health, with 18 per cent of workers reporting improvements year over year.

Women are showing increasing gains in this traditionally male industry, with 65 per cent of female respondents reporting an increase in income and 53 per cent reporting that they changed jobs for more pay over the past year.   Women are more likely to have trade credentials and reported a higher overall satisfaction with the industry, resulting in women being 130 per cent more likely to recommend the construction industry as a career path than men. Part of this positivity is coming from an improved culture overall, with 83 per cent of employers reporting they have a policy in place that addresses the need for fair and equal treatment of all workers, compared to 60 percent in 2017.

Despite the pandemic, 35 per cent of employers reported an increase in the size of their workforce, which is less of a gain than prior years but still significant. More than half of employer respondents say they’re offering more hours this year, and 90 per cent are paying overtime wages.

“Our industry has been through a lot this past year, but amidst the challenges we can see that our workforce is getting more diverse, which will help our skilled labour shortage” says Chris Atchison, BCCA President. “The BC Budget 2021 has raised concerns for our contractors, who were anticipating more fulsome investments in infrastructure to offset extraordinary cost increases, and we continue to highlight the urgency of prompt payment legislation to alleviate the burden of late payments on competed work.”

The value of the construction industry’s economic contribution is evident in the latest statistics, available in the BCCA’s Spring 2021 Stat Pack.

For key findings and more details from the latest BCCA Construction Industry Survey go to www.bccassn.com/stats

BCCA Response to BC Budget 2021