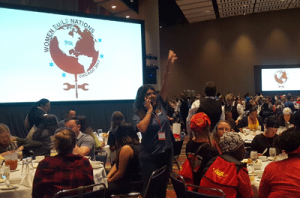 Beyoncé said it with her anthem, “Run the World (Girls)”. In Chicago on October 14-15, nearly 1700 tradeswomen from across North America came together with their own anthem, “Women Build Nations“.

Tradeswomen were welcomed from the United States and Canada as well as South America, Ireland, and India. In Canada, women represent 4.5% of the skilled workforce. We know women build nations. We know more women should be building Canada.

There were four women representatives from the British Columbia Construction Association in attendance to lend their voices and listen to the experiences of their fellow tradeswomen. These representatives were: Kathy Wallis (Regional Manager, STEP), Faith Dempster (Regional Manager, STEP), Sharon Miller (REPS, STEP), and Isabel McLean (REPS, STEP). The following is a summary of their notes from three workshops attended during the two-day conference.

Listen. Believe them. Work for change.

ANTI-OPPRESSION 101: Building Solidarity by Breaking Down Bigotry
(Notes from the workshop)

Tradespeople were asked to share and explore their own experiences as a part of the margin who feel under-represented in the mainstream. The audience was predominately women with a few men. We did not receive specific definitions for the terms “margin” or “mainstream”, yet it became clear that everyone was well-versed in both terms. We were invited to break off into smaller groups and encouraged to share our experiences. Some women started by describing what’s like to be the only woman on a jobsite. Some women described their fear of male retribution for “taking a man’s job”. These small groups provided a safe, supportive environment to talk openly. One woman chose to share her story about her first day on the job as a carpentry apprentice. At the end of her shift, her journeyman failed to inform her that the team had clocked out. Instead, he disappeared into a trailer with the other journeymen. She could hear them talking and laughing, but she was not invited to join nor did she feel comfortable leaving as she was still learning the ropes. She described the experience as “very uncomfortable”. She is now a Red Seal carpenter.

There were three main questions each of us answered in our groups:

1. What was it like to be in the margin?

The unified group answer: “It feels familiar”. Those in the margin of a group do not have to be reminded they are in the margin of a group. It is the everyday experience. Several women in the group shared that they have felt silenced, intimidated, alone, misunderstood, terrified, and degraded. Women in one group talked about being in an unwanted spotlight and being perceived as unqualified. Women discussed turning the backlash into determination. One woman shared that she saw the doubt of her co-workers as a welcomed challenge to prove them wrong.

2. What did the mainstream seem like to the margin?

There came a wave of words used to describe the mainstream: “Confident and comfortable, but lacking integrity”, “self-righteous”, “ignorant”, “whiny”, “disrespectful”, “indifferent”, “unempathic”, “above the law”, “smugly amused”, and “unapologetic”. Women described the mainstream as having a “wolf pack mentality”, “as conformists free from consequences”. They stated that those in the mainstream feel they are “the world”.

3. What would you like to say as a marginalized person to the mainstream?

TRADESWOMEN SELF DEFENSE
(Notes from the workshop)

This was an engaging workshop. We learned how to escape from several different holds. We learned tactics to use when a quick escape is necessary. We agreed that this kind of training is something all women should learn.

It was empowering, yet we could not ignore the underlying question: Would a trades conference with men host a self defense class? No. Self defense implies that it’s the woman’s responsibility to protect herself. That what women fear is just “part of being a woman”. There is a greater cultural issue. This class would have been more appropriately called Tradeswomen’s Self-Empowerment.

Two of the representatives from BCCA broke wooden boards with their bare hands. The reactions to these physical achievements were inspiring. There was an adrenaline rush!

This workshop focused on ways to engage youth and effectively promote careers in construction.

As the conference came to a close, we took the time to reflect on our learnings.