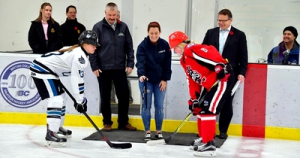 VICTORIA, BC – November 15, 2018 – This past Friday, the VI Seals squared off against the Northern Capitals (BC) in an early season Female Midget AAA (FMAAA) game at Shawnigan Lake Arena.

The game featured a pre-game ceremony recognizing Katie Banman of the Seals and Brette Kerley from the Capitals as Hard Hats and Hockey Sticks players of the month – special guest Brianna Belzile from Kinetic Construction was on hand for the ceremonies, providing gift bags to all the players, and passing out coffee to friends and family in the stands.

Hard Hats And Hockey Sticks is a new initiative, led by the BC Construction Association (BCCA). It recognizes the hardest working hockey players from the FMAAA and Male Major Midget divisions of the BC Hockey League. The program honours one player from each of the 16 teams every month who display exemplary attributes, key in both sports and construction – teamwork, safety and responsibility, leadership and drive.

“With a projected shortage of more than 11,000 skilled tradespeople in our province over the next 8 years, and only 1 in 45 BC high school graduates currently entering construction trades programs, we need to do a better job of promoting the opportunities to BC’s youth,” Says Atchison “Hard Hats and Hockey Sticks was developed with this in mind.”

The program really resonated with Kinetic. “The youth are our future,” Says Belzile “It is evident that the industry needs to encourage youth to pursue a career in the trades to avoid dipping into a deeper shortage. Most importantly, we need to educate young people that a career in trades is lucrative, viable, and respected. Our core values; Relationships, Passion and Continuous Improvement, mirror many of the values achieved through participating in team sport which made supporting this initiative a natural fit.”

“The fact that the program is also supporting young female players is extra special, given the dedication from our industry to break down barriers for women entering and excelling in male-dominated fields,” says Kulmala. “VICA has long supported women working in construction and continues to look at ways to support their advancement in the industry. We recently celebrated the 5 year anniversary of our Women in Construction (WIC) network, which has grown from a small group of motivated women in Victoria to include a second chapter in Nanaimo with a combined membership of 540 strong.”

Congratulations to all the players as all in all it was a great day, and a great game. The Seals ended up winning 2 of 3 games over the Capitals in a hard-fought weekend series.