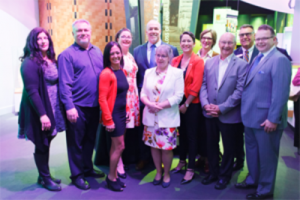 Construction industry leaders were honored at the Construction Leadership Dinner, one of many festivities and events celebrating Construction and Skilled Trades Month in BC.

On Monday, April 17, 2018, the awards were hosted by BCCA at the Royal B.C. Museum, and attended by Premier Horgan, The Honourable Melanie Mark Minister of Advanced Education, Skills and Training, and the Honourable Claire Trevena, Minister of Transportation, as well leaders from key construction sector stakeholder groups including the four Regional Construction Associations, the Industry Training Authority and WorkSafe BC. The BCCA honoured seven attendees from across the province for their leadership and exemplary contributions to a diverse construction workforce. Nominations came from every corner of the province: each honoree reflects an important part of the construction industry.

“It’s a great privilege to honour the hard working women and men who are the backbone of BC’s construction sector” commented Chris Atchison, BCCA President. “We have a workforce of over 225,000 people building more than $75 Billion in current projects. The numbers are impressive, but it’s crucial that we stay focused on the individuals and businesses that rely on us to make choices that ensure a productive and resilient sector.”

The tradespeople and contractors honored for their leadership in the trades are: Nominated by her union sister, Amy is a role model and trailblazer for women in the sheet metal trade. As a journeyperson, Amy continuously seeks to improve and expand her knowledge and skills. Amy is a safety officer in her shop and advocate for women in the trades. She lives and works in Victoria, BC. Karen is a journeyperson in carpentry from Prince George, BC. Karen was nominated by her co-worker, Stephen Chase, who describes Karen as a mentor to many young tradeswomen. She continues her work as a carpenter while serving the Construction Maintenance and Allied Workers Canada and teaching part-time at the College of New Caledonia. Becky is a Journeyperson Electrician from Vancouver, BC, where she is on the tools at the Seapspan Shipyards. She was nominated by her union sister, Carissa Belyk. Becky is the shop steward for her coworkers at the shipyard. She’s active in her local union and a variety of committees, including a women in trades committee. Mary-Anne is a Journeyperson plumber and small business owner from Vancouver Island, BC. Mary-Anne was nominated by her fellow BC Tradeswomen Society member, Lisa Langevin. Mary-Anne not only provides support and mentoring for women in the trades, she also provides employment to them with her business WestCom Plumbing and Heating. In 2017, Mary-Anne won the Sooke Region Chamber of Commerce Trades and Skilled Labour Excellence Award. Max owns IGN Systems located in Mission, BC. He has worked with the Skilled Trades Employment Program over a period of many years, sourcing many welders through the program. Max is incredibly supportive of equity-seeking groups such as women and new Canadians. Jerry is the owner of Horizon Electric Inc. and a red seal electrician. Horizon started as a small family-operated business in Kelowna, BC and now 28 years later, employs 144 electricians. Jerry has worked with the Skilled Trades Employment Program for many years and is a Southern Interior Construction Association member. Tracey is a leader who is committed to workforce development and has a passion for apprenticeship, safety, and the attraction and retention of women in the trades. She has been a collaborative, respectful, and visionary partner with BCCA, working together on the LNG Canada Trades Training Fund, the LNG Connect program in Terrace, and the many other initiatives to which she has provided her insight and knowledge on behalf of LNG Canada.

UR + BC Panelist: Tamsin Lyle