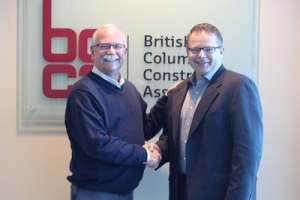 VICTORIA, BC December 6, 2016 – The British Columbia Construction Association (BCCA) announced today that Chris Atchison has been named incoming President, replacing retiring incumbent Manley McLachlan. The handover will begin on January 3, with McLachlan staying on in an advisory capacity until March 31, 2017.

Working from the BCCA headquarters in Victoria, Chris will be responsible for continuing BCCA’s pioneering work delivering provincial programs and services to strengthen BC’s industrial, commercial and institutional construction sector, while advocating on behalf of employers on key issues. Current programs such as the Skilled Trades Employment Program (STEP) will remain a priority, as will the development of our province’s leading procurement platform BidCentral, plus many other initiatives that define both the work of the BCCA and its importance in BC’s economic development.

“Over the last 14 years Manley has built BCCA into a recognized leader in Canada’s construction industry, creating a powerful legacy,” comments Bob Cooke, BCCA Board Chair. “Chris has the relationships, experience, skills, and commitment to take us forward, as well as a strong vision for future growth and sustainability.”

Atchison brings a wealth of experience in employment and labour market programs to this top role within BCCA, including nine years as COO at ASPECT (The Association of Service Providers for Employability and Career Training), and 17 years as the Provincial Employment Contracts Manager for many successful programs.  He is Chairman of the Sandra Schmirler Foundation, a national charity that has raised millions– experience relevant for the role he will play in helping to guide BCCA’s charitable arm, the Construction Foundation of BC.

A focus during Chris’s tenure will be to work with the leadership of the four Regional Construction Associations (RCAs), to ensure strong benefit to membership and productive collaborations across the province.

“I’m honoured to be stepping into this role and very conscious of the legacy that is being entrusted to me,” says Atchison.  “I look forward to working closely with the BCCA and RCA Boards and staff, as well as our many stakeholders on behalf of the construction employers and workforce we represent.”

The BCCA has been part of the province’s industrial, commercial and institutional construction sectors for nearly 50 years.

“Chris is taking the reins at a time of immense change and opportunity,” notes McLachlan. “Technology, infrastructure development, skilled workforce challenges, and even the traditional association business model are all in play. I know he’ll do a great job, and I look forward to seeing what the future brings.”

Construction File – Proactive Release of Project Information for the Construction...